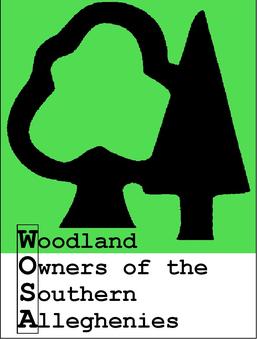 In 1993, Armin Behr and John Herr became VIP-Coverts, a program which is now called the Pennsylvania Forest Stewards program.  This was just the second time that the training had been offered to private forest landowners in Pennsylvania. The class consisted of 40 hours of training on sustainable forestry and was given by Penn State at Camp Living Waters, in Bedford County.  Dr. Jim Finley and other instructors challenged Armin and John to take on a final project that reflected what they had learned.
Armin decided that he wanted to form a Woodland Owner’s Association in Bedford County, since he owned land in Bedford County.  However, he lived in the D.C. area, so John agreed to be his assistant, since John lived in Bedford County.  In 1993, John and Armin contacted the Bedford County Conservation District for help and Sue Fox and Mike Cessna provided mailing lists, postage, and secretarial help so forest landowners could be contacted.
From that mailing, there was a meeting at the Bedford Elementary School.  About 20 - 30 people attended the meeting and from that group we organized different meetings at individual’s homes.  At these meetings, members compared what each one was doing to foster forest stewardship.  Officers were elected and an agenda was created.  Steve Wacker, the service forester at the time, was instrumental in assisting the group by providing educational programs and help when we visited various properties.
Don Morris owned one of the properties that we visited.  Don came up with the idea of holding an annual conference so the message of forest stewardship could be spread and so we could acquire more members to grow the organization, which we named, “Woodland Owners of the Southern Alleghenies.”  From this endeavor, WOSA’s outreach was expanded to areas outside of Bedford County.
Penn State’s Dr. Jim Finley was a big help in organizing and conducting the annual conference.  The conference attracted forest landowners like Ron Johnson and Dave Schreffler, who eventually became board members and assisted the group in developing bylaws.
When Don Morris moved, Ben Tresselt, Jr. and his wife, Carol, joined WOSA.  Ben took over as conference planner and MC, and later became president.  Also instrumental in assisting WOSA were Loretta and George Radeschi, as well as June and Russell Sidebottom.
A website was created and members began using email to communicate.  It was also during this period that Mike Jackson joined the WOSA Board and helped to link the Bedford County Bird and Nature Club with WOSA.  These groups continue to work together on joint workshops.
WOSA is a 501(c)3 non-profit corporation and acquired land when one of the members willed two properties to WOSA in 2015.  The Maryland property was sold, but the one in Bedford County, which is a combination of fields and forest, will be used as a demonstration forest.  The opportunity to become a forest landowner presents a new chapter for WOSA, as we approach our 30th anniversary.

WOSA membership is open to everyone interested in the sustainability of private woodlands.

Forest landowners may join for:

Associate memberships (non-voting members) are for those who do not own forestland, but

Sponsor Membership (non-voting member) is $50 and includes recognition at our events.